CVS locked out of Disability Accommodation

The Independent Community Visitor can no longer enter privately run disability homes to check on residents because of changes under the NDIS.

Maurice Corcoran is concerned his office could lose funding in next month's State Budget because its officers are no longer allowed to visit about 1500 people with disabilities in 430 homes.

They will still cover about 500 people with disabilities living in 200 state-run houses, and residents of mental health facilities. The change took effect last week because the private homes are now funded through the National Disability Insurance Scheme, rather than by the State Government. Mr Corcoran said he and his staff had 'run the Mum test' over facilities to give residents and their families peace of mind about standards of care.

"Our role was to apply community values to the visits — how would you want this service to be for your loved one if they were in care? he said.

"That won't be happening in the same way now."

Instead, the new Quality and Safeguarding Commission, established as part of the NDIS, will conduct visits.

It responds to complaints or reported incidents, including abuse and neglect, monitors the use of restraints, checks compliance with the NDIS code of conducts and is developing nationally consistent screening of disability workers.

She said funding for the Community Visitor scheme "will be considered in the up-coming State Budget".

Mr Corcoran said the 'emphasis' of the scheme "has always been on — having discussions with the people using the service and checking if they're being treated with dignity and respect". He said authorities interstate had "made amendments to their legislation to allow their visitor schemes to continue".

The SA Human Services Department was exploring whether his office could still visit about 600 people in private disability homes who are under the guardianship of the Public Advocate.

Opposition spokeswoman Nat Cook said it would be "completely outrageous" if the visitor scheme budget was cut "at a time when there are dark clouds over the confidence the community has" in the care of vulnerable South Australians. 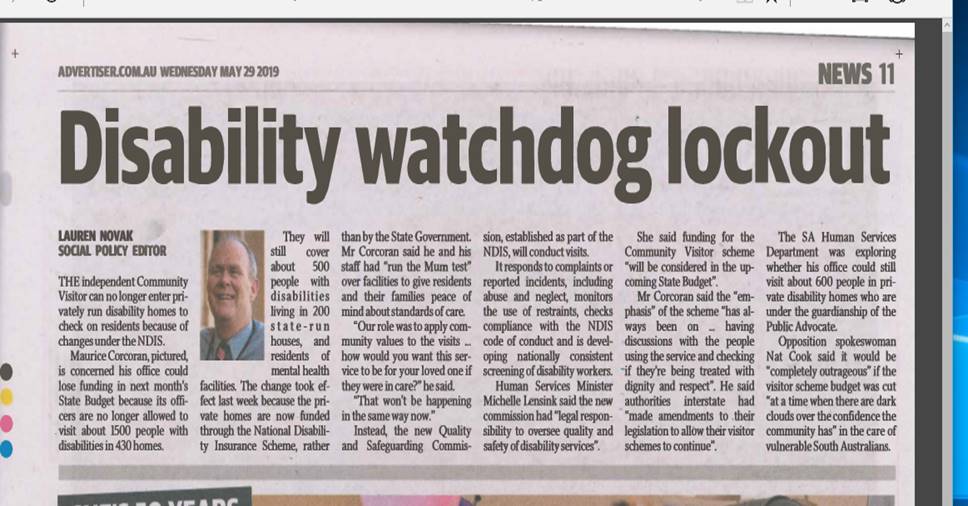 This site is licensed under a Creative Commons Attribution 4.0 Licence. © Copyright 2021 DHS . Back to top